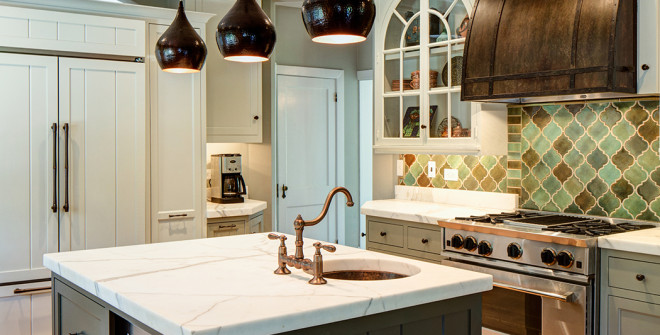 Shuffle the deck: Changing up rooms refreshes a Rugby kitchen

… “Custom cabinetry is great for that reason—you can get so much more functionality,” said Outlaw. She added that local cabinetmaker Albion had completed this project for a third of the price quoted by a stock supplier.

Mostly what strikes a visitor, though, is not functionality but looks. This kitchen has a distinct aesthetic, combining elements of Hosny’s Egyptian heritage with her take on a local sensibility. “I wanted it to feel like a house in this neighborhood in Virginia,” she said—“nothing really shiny. I wanted a really earthy, natural look.” To that end, she chose extra-thick, matte-finish Italian marble for the countertops rather than highly polished granite.

Copper is another important thread, tying together sinks, a custom range hood and the three pendant lights over the chunky center island. It echoes, too, the pair of lanterns that Hosny found in a bazaar in Egypt and had wired as pendant lights. They hang over the main sink. …

As featured in Abode – read the full story here >